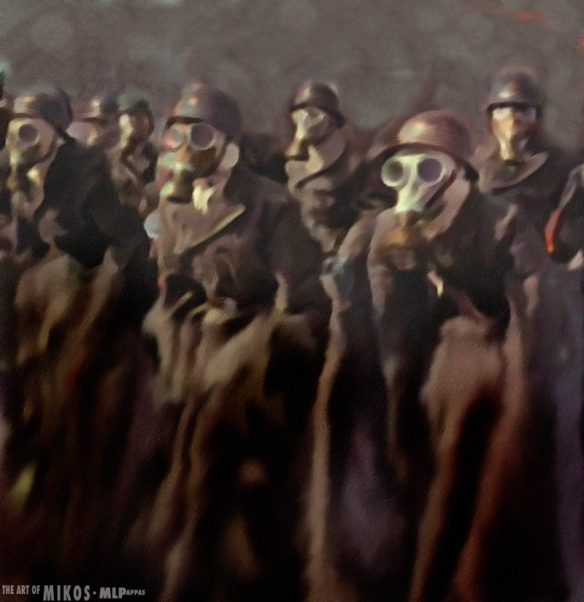 The inspiration for this painting comes from the dislike for those that attempt to silence people through oppression or other avenues. To control the free mind and spirit of an individual or the masses. To drain them of personal freedom and dignity. I see it daily, how people are forced into compartmentalization within their lives. They ( the silencers ) unleash their poison on others to control them, yet they attempt to shield themselves from their own evil. However they are a distortion of humanity by their own means, and eventually will reap what they have sown.

THE ART OF MIKOS

Life is about weighing the risks. Making a run for it, in hopes for salvation. Something better than what you’ve been placed in. Punching out of an existence you don’t want to exist in. The desire for something better makes us run for the hill, no matter what the outcome could be.

I believe most have a Sunset Hill in some form in their lives. It could be a lover to which you want to escape with to a better place or a window in which to go through to another life that would be a dream compared to the one that your trying to escape from.  The metaphorical for Sunset Hill is hope. That chance to live a dream that one desires, no mater what that is.

This is the second painting that is from the Sunset Hill series titled Sunset Hill.
https://pappasarts.wordpress.com/2013/06/08/artwork-sunset-hill/

Here is a crop to the center of the Escape to Sunset Hill piece.

This is a center blowup for more detail of this work

As far back as I can remember I was always intrigued by clouds. On a family vacation to Mount Shasta when I was around 6 years old I remember I was laying on my back at the base of this enormous mountain staring into the sky. I was watching these clouds skate around the mountain, massive and mysterious in nature, changing shape from second to second. It was like they were alive, morphing from one creature to another; it was nature’s ballet. This visceral experience has stayed with me ever since.  I’m still intrigued by watching these voluminous cloud creatures that dance through our skies daily. That’s where the Cloud Maker painting comes from. My childhood memories of these beautifully alluring creations, and imagining if there was someone that made them just out of view. An artist who instead of sculpting stone masterpieces, this mysterious individual created their work of art in the skies above with clouds. 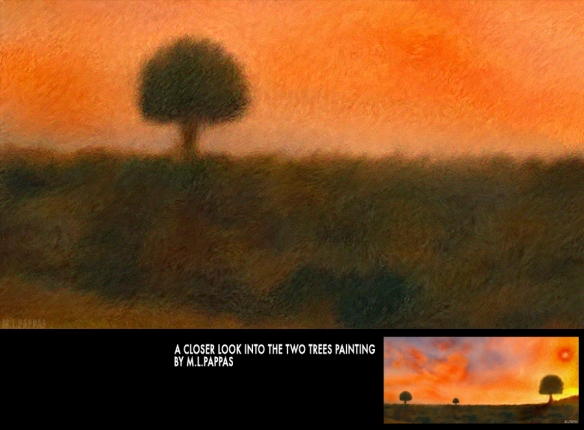 The two trees is a personal painting for me. It’s about two children looking onto their father moments after his death. The distance between them grows as their father bask in sunlight from the heavens above while he slowly fades away. After my father died, much to young he was, I was changed yet again in my life. The premature death of my mother years earlier was the shattering view into the reality of the fragility of life. Loosing my father years later was the cold seal on that truth. The reason it’s called two trees, is that’s what is left, two trees, or two children. I can’t get my parents back, like a tree cut from the forest, it’s no longer. Gone, and only something new can rise from the earth where this tree once stood. This painting makes me sad and happy. I see this as a glimpse of a final farewell, however a farewell I was not ready for, nor prepared to face, or ever wanted too.

Here is a closer peek into the Sunset Hill painting. 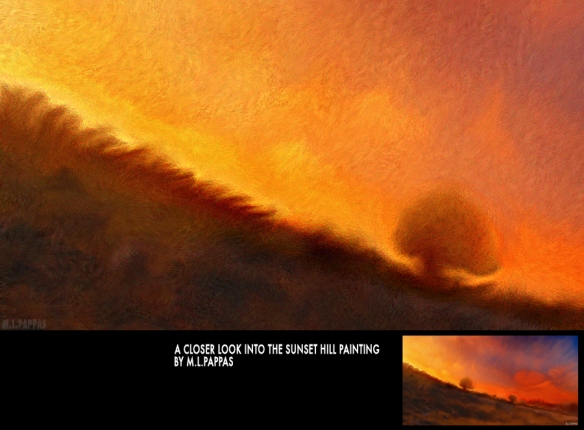 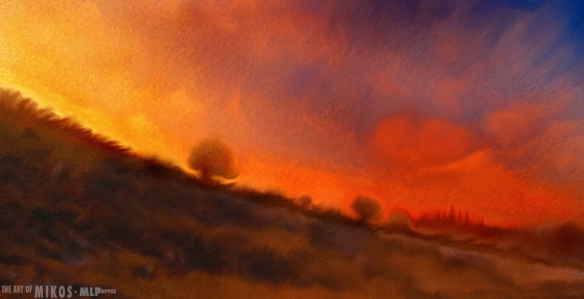 The Sunset Hill painting at its very core is a metaphor for hope. It’s the escapism dreamed about by so many since childhood. A pathway to another reality where your dreams and desires can come alive; where you’re in control of your destiny as well everything around you. I believe if you keep an eye out for it, you’ll find your Sunset Hill. When you come upon it you’ll know it, because the colors that surround it glow with an intense beauty that only can be matched by the spectrum of your hopes and dreams. Never give up, and always have hope in the things you dream about as the next time you’re roaming around somewhere in the world, you might just come upon your Sunset Hill…

This is the other painting that is from the Sunset Hill series titled: Escape to Sunset Hill 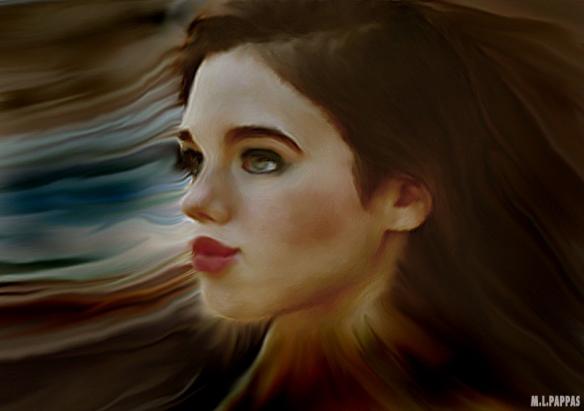 Thought I would post these charcoal sketches for two of the pieces from The Enigma Series; Ascending and Enigma Coming. I love to see studies from other artists, sometimes there exact and in other cases I’m intrigued how the work can vary from the idea stage to completion as it goes through the creative birthing process. 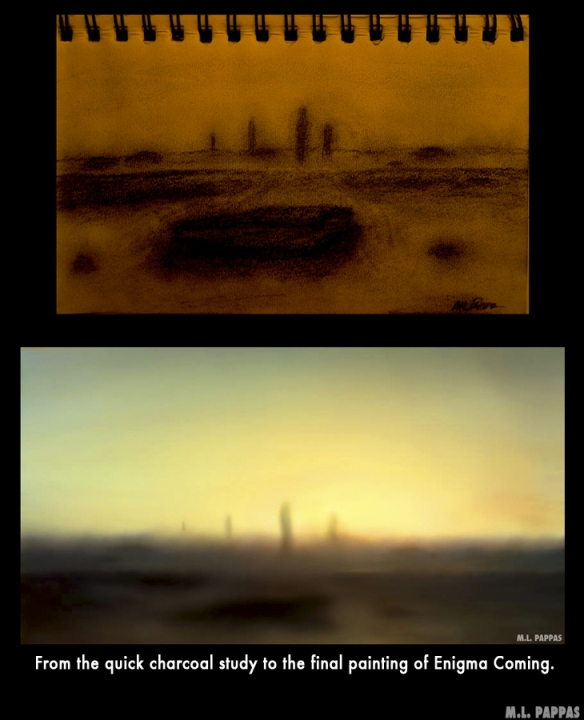 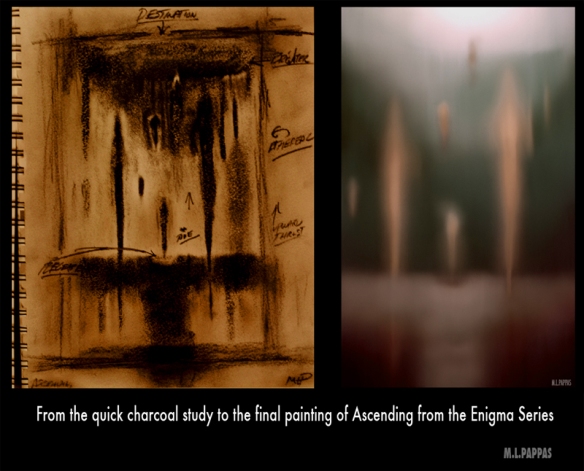